“ECOFOR” technology has been used at three cement plants in Turkey (Table 1) since 1999/2000. The device is an active electronic neutralizer that initiates corona discharge for depolarization of comminuted material. With its help the mill’s operation can be optimized since the grindability of the material improves, the grinding media are cleaned completely or partly, there is 2-3 times less wear, the cement’s flow- ability increases, the mill’s capacity increases and the energy consumption drops. 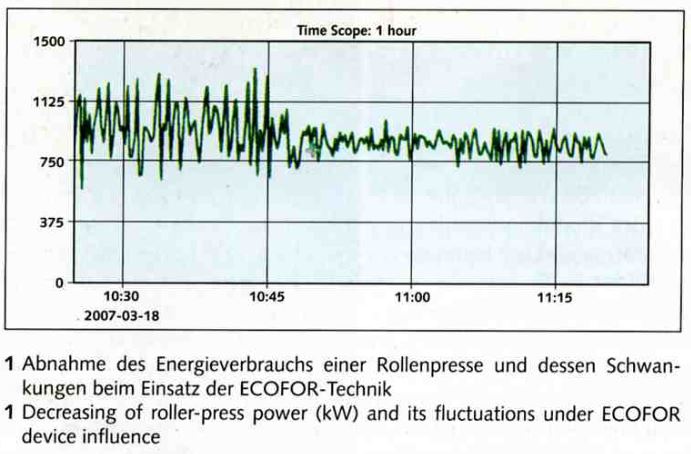 The devices operate efficiently also in the grinding systems using roller-presses. Significant is the decrease in the fluctuations of power consumed by their motors and the decrease of its average value (Fig. 1), occurring during the first hour after switching-on the device. During tests in 2007 at the plant OYAK Adana Cimento, the capacity of a roller-press and of a ball mill was increased with the help of two devices from 122 to 137 t/h.

Electric charges on the surface of comminuted materials can also have an effect on cement grinding. The adhesion, the force of which has an electrostatic component, makes the grinding of the material difficult and manifests itself in the form of a powder coating on the grinding surface. As the size of the particles becomes smaller, the aggregation of the powder takes place due to their electrostatic attraction. Such disperse systems partly lose flowability. However, the aggregation during the grinding is reversible and capable -under certain conditions – of promoting even the particles’ disintegration.

Grounding is not a full protection from static electricity charges, it only restricts the limit of the accumulated charge.

The charges flow down according to the exponential dependence on the time constant, commensurate with the dielectric permittivity of the processed material and its conductance. In order to decrease the level of the free charge space there are two additional possibilities, apart from the grounding:

ECOFOR technology is not an alternative but a complementary technology to grinding aids. Using them both, highest energy saving results can be reached.