ECOFOR technology is intended for intensification of cement grinding by way of its hardware-controlled electric neutralization.

In 2002 by the initiative of the USA Portland Cement Association a confirmation of the condition of electric charge of the fresh cement was obtained [PCA R&D Serial No.2855]. Electric potential was measured in the discharge chute of the mill without grinding aids and worked out approximately 5 kV while its polarity was positive. Thereby electrization of comminuted material was confirmed.

This measured electric potential was only a finishing result of electro physical processes inside a mill (Figure 1). 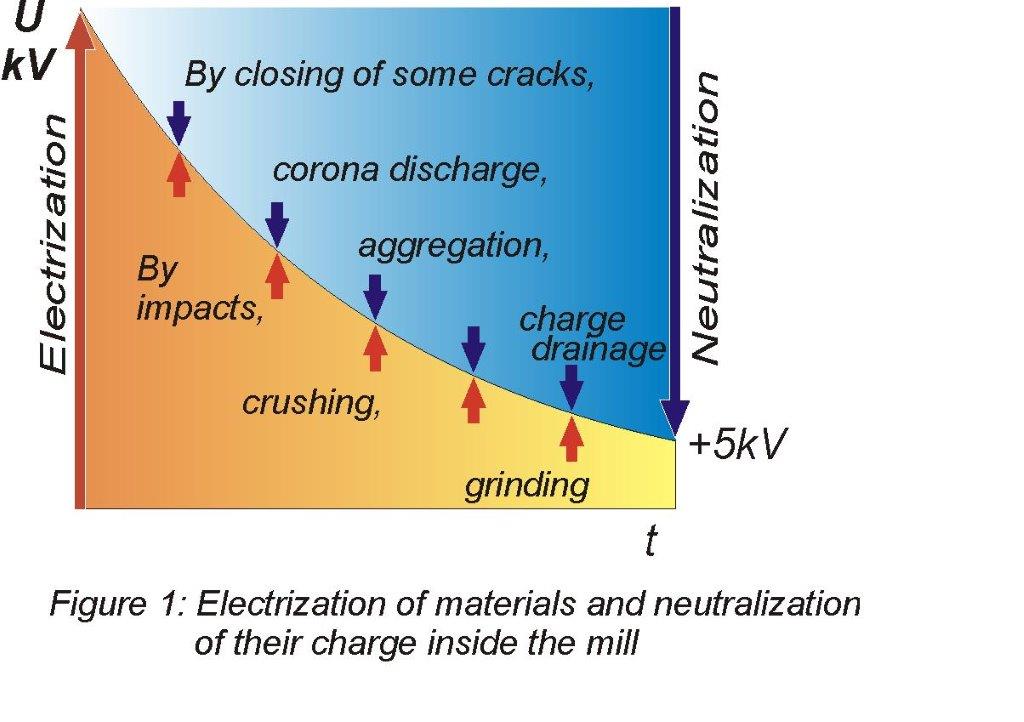 There is every reason to believe that total level of material electrization is 30-45 kV (we mean electrization of material inside the mil as a result of material’s impacting, crushing and grinding; total level is the same in a zone of friction contact). It was possible to oversee only remained part of electric charge in the output of the mill. After the impact some part of generated cracks in the material were closed under action of electric charge with different polarity. Under such conditions the feasible grindability can not be reached. Some charge was neutralized by corona discharge. Oppositely charged small powder was partly aggregated. Grinding media was covered with hard dirty coating of charged powder. As the result the impact was damped and its efficiency decreased. Finally drainage of some charge was carried out by the grounding system. Nevertheless particularly the positive charge was a surplus for the mill in conditions of its functioning. We explain the reason of their appearance by the properties of a thin layer of 5-30 micron of the surface of grinding media put on the percussion deformation inside the mill. Named as “debris-layer” it has the high density of dislocation – the breaches of metal crystal structure. Insignificant, native positive electro charging of metal surface was increased many times under its deformation due to displacement of dislocations towards the surface of loaded metal. Quantity of dislocations was 108 ÷ 1012 / cm2 of the surface. They carry themselves the positive electric charge corresponding to atomic nature of metal crystal. During the deformation they act as electric carriers of dislocating current. The electromotive force appears on the surface of loaded metal. It is generated by positive charge of dislocation. The adhesion or/and neutralization of some part of negative electric charged powder takes place on the positive electric charged surface of grinding media. In that way the surplus of positive ones conformably appears in the mill’s output.

Formerly we have reported about the assumption of antistatic, electro physical properties of grinding aids. Portland Cement Association gained the additional proof of the phenomenon. If liquid grinding aids are used electro charging of fresh cement disappears and the mill’s capacity is increased. Exactly anion active grinding aids are used for intensification of cement grinding. They dissociate in water solution and generate anions with long hydrocarbon chains. Their molecules consolidate in the surface layer perpendicular to the surface. Thereby neutralizing activity of such grinding aids against electric charge of positive polarity which appears during cement grinding is determined. The negative charge is not dangerous for grinding at all as they are allied to always negative potential of the Earth on which equipment stands.

Grinding aids technology and ECOFOR device generate basically equal physical effects because their similarity lies in electro neutralizing action. If a mill has high capacity, both grinding aids and device should be used together to achieve highest results. The device replaces grinding aids for mills with capacity not higher than 60 t/h and it is unreplaceable for roller-presses. The difference between these technologies is not only in the fact that one is reagent and expendable and another is hard ware- controlled. They also differ by response time to turn on and off. Grinding aids needs one hour to start being active, and the same period to terminate. “ECOFOR” works into process during several hours and has a long duration after-effect from several days till two or three weeks depending on the duration of combined work with the mill. Its other peculiarity comparing with grinding aids technology is strengthening of grinding media surface and decreasing of its wear by 2-3 times. For instance this is confirmed by twelve years of exploitation of five devices at the “Vassiliko Cement Works” in Cyprus. Difference between technologies is connected with the action of device on the surface of grinding media. In such a case the property of working surface undergone important changes. The grinding media appears inside the distributed electric circuit of the charge drainage starting with the charged material exposed by comminuting. Further it passes through the metal elements of the equipment connected to the grounding system. Working surface is positively charged, so it decreases the efficiency of charge drainage because the surface takes part in this circuit as anti electromotive force towards positively charge of powder.

Essentially the metal surface is available for various kinds of active actions. That lets the processes which take place on it to be controllable. “ECOFOR” device is able to fulfill the ability. It effects the neutralization of electric charged dislocations risen onto metal surface under its loading. Anti electromotive force is being eliminated from the circuit comminuted material charge drainage. The result is that efficiency of drainage increases and negative aspects of electrization decreases. It creates conditions for increasing of mill’s capacity by 8-12% with the use of grinding aids or 12-25% without them for small mills. At the same time specific power consumption decreases by 3-7 kWh/t of cement. The results of recent introductions of the devices outside Russia could be seen in Table 1.

In present time we produce devices of new generation. They are universal for different electric power supply systems and exclude faults of their using without our presence.

The inhibited reaction of the mill on turning on of the device comparing with action of grinding aids can be explained with the necessity of gradual discharging – annihilation of dislocations of “debris-layer” and its polygonization. Undersurface layer of metal structure improves one layer at a time. Cleaning of grinding media from hard dirty coating takes place during the transient process. The working surface becomes smoother and acquires high strength and wear resistance. Unusual for grinding aids after-effect of “ECOFOR” device is connected with long duration wear of such non-defective layer of the grinding media surface under trail turning off the device.

The additional advantages are decreasing for the wear of grinding media and increasing for discharged cement flowability. The main propositions of theory of dislocations and physics of surface were used in the process of working out of this technology. Although investigations in those fields were made in microelectronics’ interests, such fundamental propositions were succeeded to use for working out a new method of intensification of cement grinding.