There is a negative manifestation of activated electric carriers inside the cement mill during the cement grinding process. ECOFOR technology provides an increase in the capacity of grinding systems by the use of an original electric neutralizer. It has several distinctive features that help to reach average 7% of additional capacity and to decrease specific power consumption by 2,5 kWh/t of cement.

The technology of cement manufacturing is generally related to chemistry and mechanics, but especially the grinding process has to be considered from an electro-physical perspective. Such a point of view was protected by our European patent EP 1 003 608 B1 and PCT/RU/2010.000392. Later, it was confirmed by the presence of high positive electric potential of fresh cement described by US Portland Cement Association R&D No 2855. The electric effects, which occur in the process of cement production, should not be neglected. The accumulation of electric charge on borders of material heterogeneity is intensified under grinding of clinker, which is a dielectric material with a small piezoelectric activity. It is quite enough for producing of difficulties under grinding due to induction of electric charge. We have offered to consider them as the electrostatic component of resistance to grinding and to neutralize it for the sake of energy saving.

Cement clinker has the combination of double electric layers as a solid colloidal solution. Dipole charges appear due to the deformation on the borders of its crystallites, inclusions, layers, pores with different dielectric constants. This is the reason of material polarization in its volume during the deformation. Charge accumulates and remains on the surface of the powder, if the time of the contacts’ destruction is less than the time of charge relaxation. It has no time to flow down completely to the ground or become neutralized by corona discharge between the dividing surfaces. As a result the cracks with remained charge, which are formed during charging, are partly closing. Thus the grindability of the materia! is deteriorating (Figure 1). 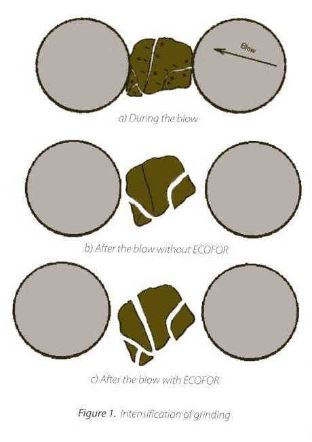 Some oppositely-charged small powder is aggregated at the same time. Sometimes grinding media are being covered by hard dirty coating of charged powder. So there are a few negative manifestations of activated electric carriers which limit the grinding process.

The electro-physical device “ECOFOR” is designed for the intensification of dry grinding by neutralization of activated positive electric carriers inside the mill. The device power consumption is not more than 100 VA and it needs a single phase 220-240 V, 50-60 Hz power supply. It has IP65 protection level and its weight is less than 12,5 kg. The device can not do any harm to the operator and to the equipment. 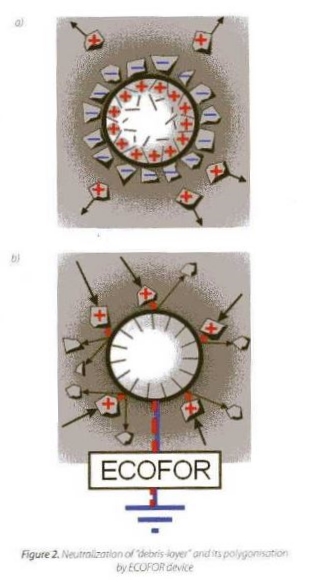 The direct object of the device’s action is the working surface of the grinding media. It effects (Figure 2b) the neutralization of electric charged dislocation raised onto metal surface under its loading Anti electromotive force is eliminated from the circuit drainage of comminuted material charge to the ground. Efficiency of grinding increases and negative manifestations of electrization decreases. The improvement of the metal crystal structure of the undersurface layer of grinding media takes place under the device action by degrees, layer by layer. Efficiency of mechanical force inside the mill and grindability of comminuted material also improves. All together a new condition for increasing the mill’s capacity by 6-10% is created, additionally to the grinding aids action and a decrease of specific power consumption by 1,5 – 3,5 kWh /t of cement. The results of the recent use of last generation ECOFOR devices at Turkish cement plants are shown in Table 1. 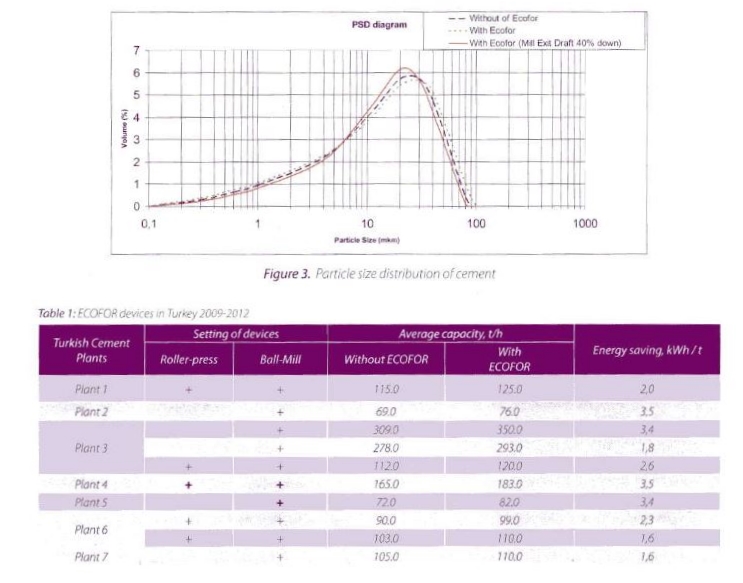 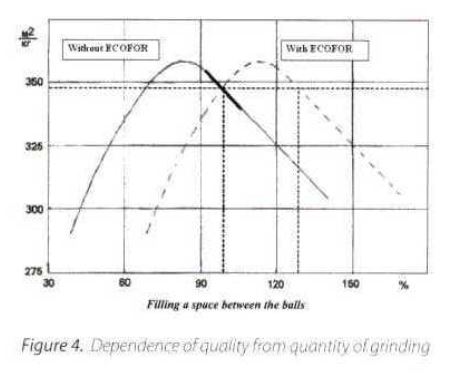 The devices operate efficiently also with roller-presses. An unrecoverable disadvantage of these roller-presses is that they can not work with grinding aids. As a while it limits the possibility of such grinding system. Uniform distribution of grinding aids is not possible inside comminuted material between rollers of press. This imperfection ot roller-piess is eliminated by the use of out device connected in parallel to both of rollers. As it shown at Figure 5, after fifteen minutes the consumption power of the roller driver was decreased due to the device action for improving the material grindability. The amplitude of power oscillation is also decreased that evidences about reduction of the roller vibration. With our device the Blaine after roller-press’s separator increases by 200-500 sm2/g and the capacity of the grinding system is a whole increases, it is advisable to use a second device for an additional increase of end mill capacity and third for rhe separator. 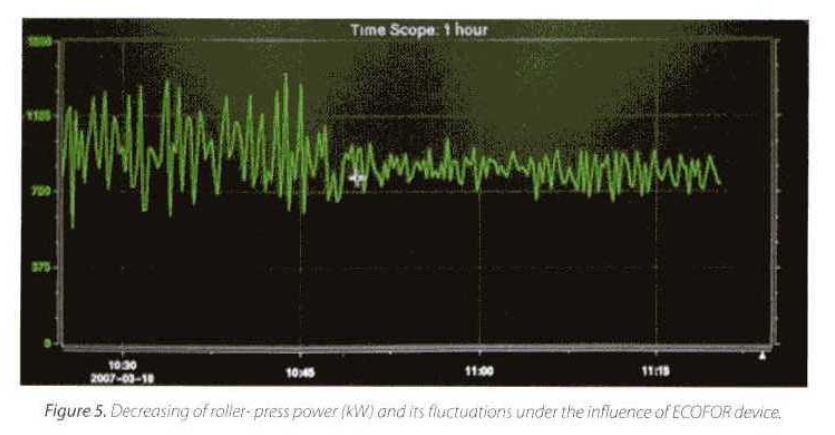 Using the ECOFOR method and device gives the possibility to save energy, in other words, to have a more profitable cement piant. Our company plans to continue the work together with Turkish specialists on the reduction of energy consumption ot grinding in Turkish cement plants.