There are several signs of dry mill sickness, such as hard dirty coating and high wear of grinding media, aggregation of cement powder and clogging of the mill. These problems increase specific power consumption of cement production and decrease a capacity of the mill. The first introduction of a positively acting mixture for mills were grinding aids. Since 1997 a new medicine for mills – the Ecofor device has appeared as an additional means of mill improvement.

ECOFOR technology is based on electro-physics phenomena, which accompanies material modifications during the grinding process. Several years ago Ecofor Co offered to look at the cement grinding process from such a standpoint. It had analysed the components of the material’s resistance to grinding and separated the electrostatic forces involved. 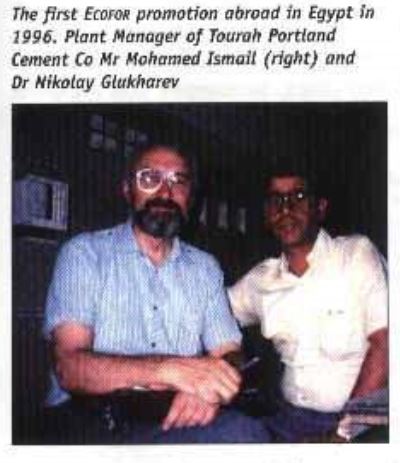 Because cement’s components (clinker, gypsum, slag and other additives) are insulators they are electrically-charged due to blows and friction inside the mill. The wear of grinding media also occurs as a combination of simultaneous processes, which can involve electric charges. Plastic deformation is accompanied by the gradual destruction of metal crystal structure in the points of recombination, forming electrically charged dislocations.The main cause of coating at the grinding stage is an adhesion of powder to a metal surface. The adhesion forces have an electrostatic component. The reason for aggregation of small size powder is electrostatic too. 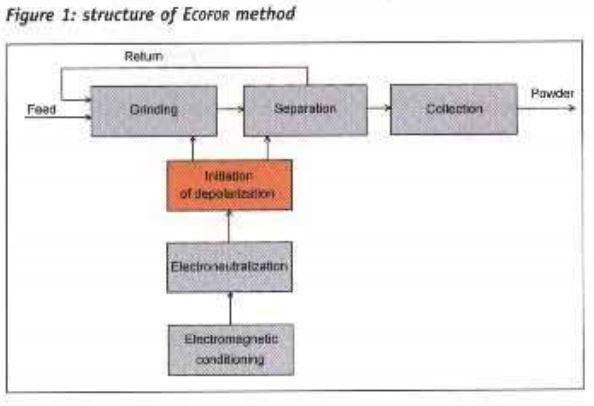 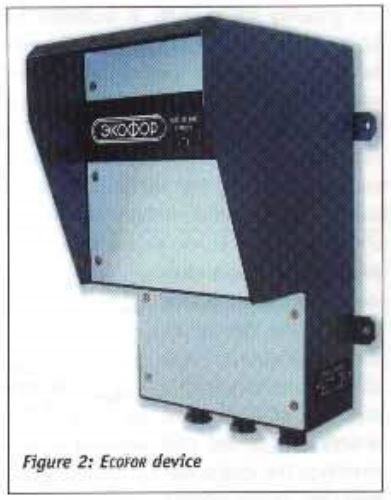 Ecofor devices (Figure 2) neutralise free electric carriers, not neutralised by common earthing and grinding aids electric carriers, and neutralise their negative action. The devices are original neutralisers’ because they force additional decreasing of electrostatic phenomena in the course of grinding. Comminuted material is connected with an Ecofor device by appearing as distributed metallic electrical current through the balls, armour plates, the body and shaft of the mill, a body of output bearing to the device’s input. The device should be installed within not more than 25m distance of the mill. The terminal block of the device must be connected for instance to the top part of the mill’s output bearing. The device consumes 90W and needs a single phase 220-240 V, 50-60Hz power supply.

During the first hour, after turning on the device, a destruction of aggregates and the escape of their powder content away from the mill takes place, as a result of additional neutralisation. Grindability of material is improved because more of the cracks are being opened after the early blows. The mill begins to release off material and becomes more ‘gluttonous’. The return from the separator is decreased a little, while ftowability of cement is increased. And the temporary improving of the grinding quality (for instance Blaine) is observed. 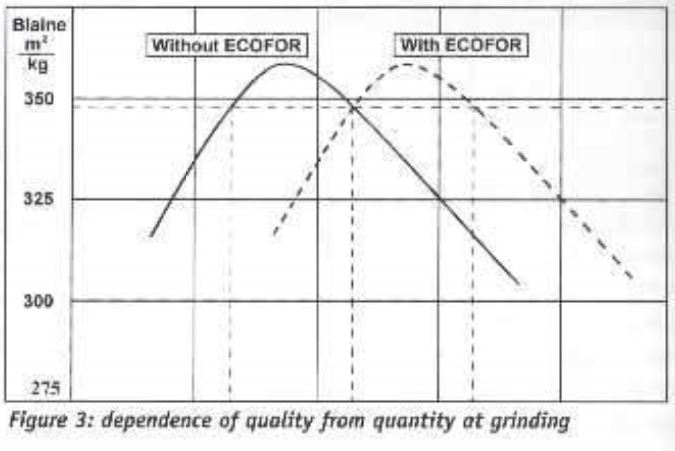 When grinding aids are also used with ECOFOR devices, the increased grinding amounts range from 8-12 per cent for ball mills and from 4-7 per cent for vertical roller mills. When the ball mill works without grinding aid capacity is increased by 12-25 per cent. The capacity of the mill has to be increased gradually. The main part of improving the process lasts about 12-24 hours. The speed of material going through the mill is accelerated and the mill becomes emptier. The optimum level of comminuted material inside the mill is shifted up. The Ecofor device forces the mill to keep more material inside than before without any danger of clogging (Figure 3). It is also necessary for amending of abrasion of material in the last mill chamber. The mill’s exit draft has to be reduced by 20-40 per cent for that as well as for the best balance of chamber loads too (sound of first chamber must be less than before and more sonorous and metallic in the last one). Circulation load must be increased additionally by 10-30 per cent. The speed of the separator’s distribution plate has to be reduced by 3-5 per cent for stabilisation of the forced material by the Ecofor device grinding system. After installation of the Ecofor device it is possible to work either a manual or automatic regime, if a computer control system is used it is necessary to change set points for its canals a little and to put into operation the new one for the mill’s exit draft.

If grinding media has a coating, its complete cleaning will happen due to the neutralisation of electrostatic component of adhesion forces in three days, it is claimed.

The wear of grinding media is also said to decrease under the influence of the Ecofor device. It reduces a probability of the inevitable meeting of dislocations inside metal crystal structure. So surface defects of grinding media are sparser and strengthening of their surface takes place.

All the above mentioned benefits are signs of mill recovery and the prolongation of its life. As a result the specific power consumption for grinding is decreased by 4-20 per cent. The possibility to reduce the mill’s working time and consequently power expenses arises. Since 1997, Ecofor Co has sold more than 90 devices. Some of the results are shown in Table 1 and more detailed results for Vassiliko Cement Works Ltd in table 2. 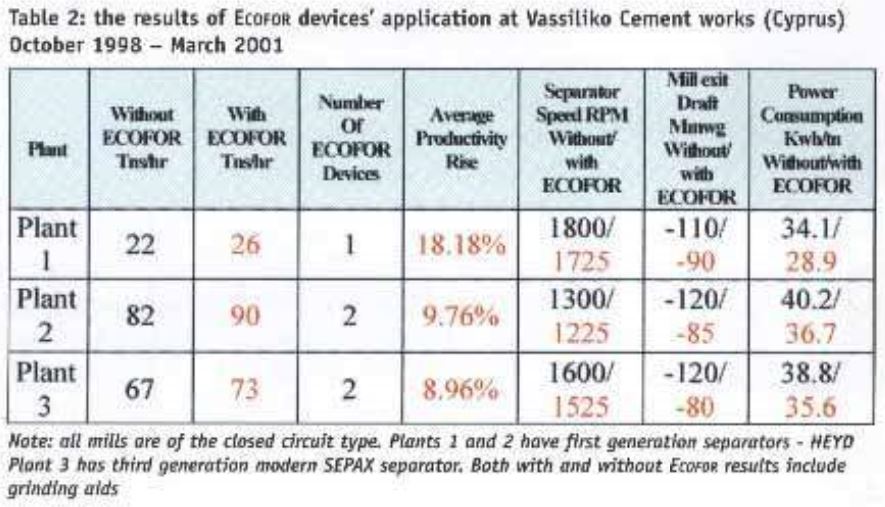 According to information from the Vassiliko Cement Works Ltd it has decreased the wear of grinding media significantly with the help of Ecofor technology. During the four years of usage of Ecofor devices the plant has seen a fixed reduction of wear of ‘HARDALLOY’ balls from 25-40g/t to 9-13g/t.

As a consequence of strengthening the grinding media, the effects last for a long time after the device is turned off. In such case, the mill continues to work several days in ‘forced regime’ and slowly comes back to the old level of capacity until the hardened, and less defective, surface of grinding media will be warn out.

Ecofor Co’s technology has been patented in Russia, Europe, USA and China. It has also been demonstrated around the world in 28 countries. Some specialists have tried to compare the times of response of Ecofor devices, after they have been turned off, with grinding aids. It is not possible, because Ecofor technology is said to be different in one important principle – long life expectancy of Ecofor devices is not a defect. Ecofor Co claims that it is an advantage as it provides the medicine of prolonged action.

Of course grinding aids have good effects, too. Ecofor technology is not an alternative for them and is destined for integral usage. The product’s advantages are an additional energy saving effect reduction of the consumption of grinding media, as well as increasing the stability of the mill’s operation.

Ecofor Co says that the device pays for itself in one year. These advantages correspond not only with global ecology goals but also with the interests of producers.