Grinding is the most power-intensive phase of cement production. Many well-known companies are working on the minimisation of energy consumption at the grinding stage. Some design and promote new mechanical grinding equipment. Others provide consulting and supply armour plates and other grinding media in the optimal range. Some companies produce effective grinding aids. Since 1997 the Russian Ecofor Co. has been trying to promote energy saving with its original technology. We would be happy to equip every grinding unit with an Ecofor device, to achieve an additional 8-12% output with a simultaneous decrease of specific power consumption.

We offer to get an additional result not by using increased input force, but by decreasing the comminuted material’s reaction to the force. The analysis of components of the material’s resistance to grinding gives the possibility of a new technique for grinding intensification.

As a consequence of mechanical actions inside the mill, the comminuted dry non-electrically conductive material becomes charged or polarised. A multitude of free electric carriers appears. Their interactions result in the splitting of some part of cracks inside the pieces of material after the blows, in the aggregation of ground particles and very often in the formation of coating on grinding media. So free electric carriers decrease the efficiency at grinding.

Their appearance is a symptom of an electrostatic component of the comminuted material’s resistance to the force action. The technology for intensification of grinding by special depolarisation of comminuted material is supported by our European Patent Application. The Ecofor device belongs to the class of induced neutralizors for the forced decrease of electrostatic level at production. 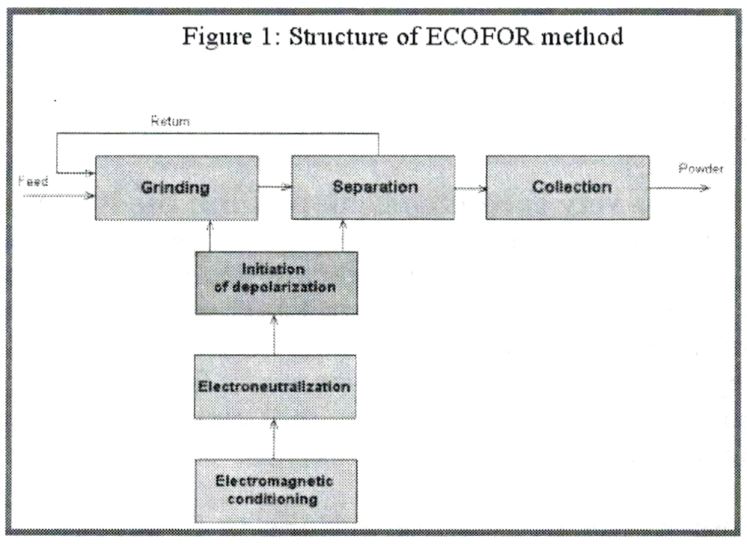 The size of electric commands is insignificant but the speed of interacting is so high that induced voltage is enough for an appearance of a corona discharge. In this case under the action of the electrostatic fields the ions of air move in the direction of charged particles of the material electro-neutralising them. So the grindability of non-electrically conductive materials is improved and aggregates are destroyed (Fig. 2). 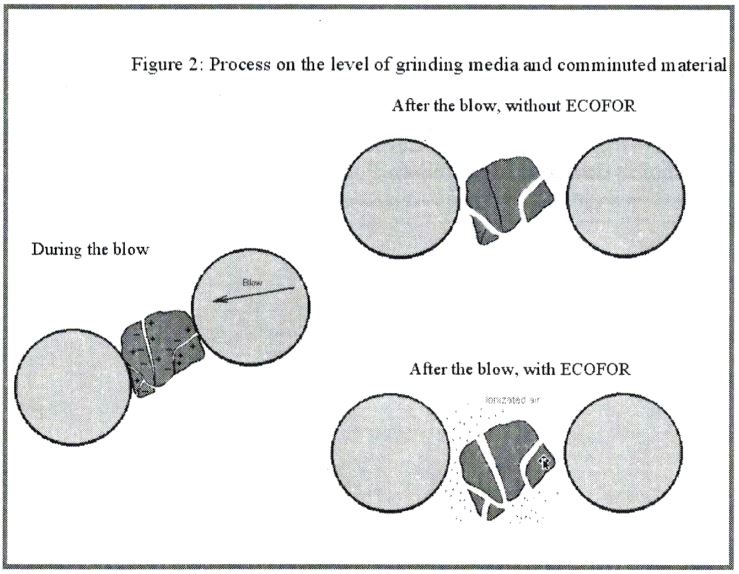 There was an Ecofor presentation at the first European Cement Conference 1999, in Berlin. Later we continued the promotion of our technology. The results of mills output improvements are shown in Table 1. 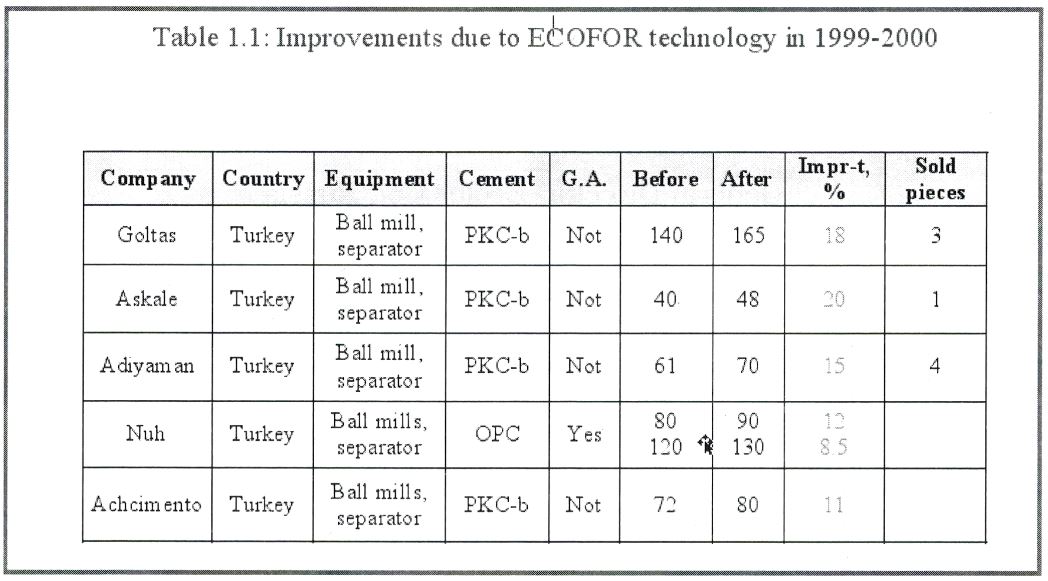 Eight Ecofor devices are working in Turkey at Goltas, Askale, and Adiaman cement plants. The produced cement uses a trass additive. The use of Ecofor devices attained the improvements from 15-20%.

We got a very good chance to perform the Ecofor trial in France at Vicat’s Montalieu plant. It is a really modern cement plant. They developed and apply, in my opinion, the best control system for cement grinding. Control commands are produced automatically following the measurement of fineness every 5 seconds by a laser granulometer supplied by Insitec Co. The mill and separator performance improved after turning on two Ecofor devices – the first was connected to the mill and second to the separator. Following the new more favourable and powerful grinding conditions we adjusted the set points for the sensor of first mill chamber, circulation load, the mill exit draft and increased the feed by average 9%.

Four Ecofor devices are working in Saudi Arabia at the Yanbu cement plant. The output of two raw ball mills each of 288t/h was increased by 15t/h after turning on the devices.

Our cooperation with the Hanil Cement Mfg. Co. of Korea has been successful. We were able to increase output of not only three closed-type ball mills but also the output of the roller press and vertical roller mill. Sometimes a roller press performance places a limit to the possibility of grinding systems. It is very energy-stressed and energy-concentrated equipment, not as, for instance, the energy- distributed ball mill. It is known that pregrinding is a very positive and profitable method. That is why the safe intensification of roller press is very important. Hanil Cement Mfg. Co. has a pregrinding Polycom system with Sepol. We used one Ecofor device connected to Polycom rolls. The results are in the Table 1.2. 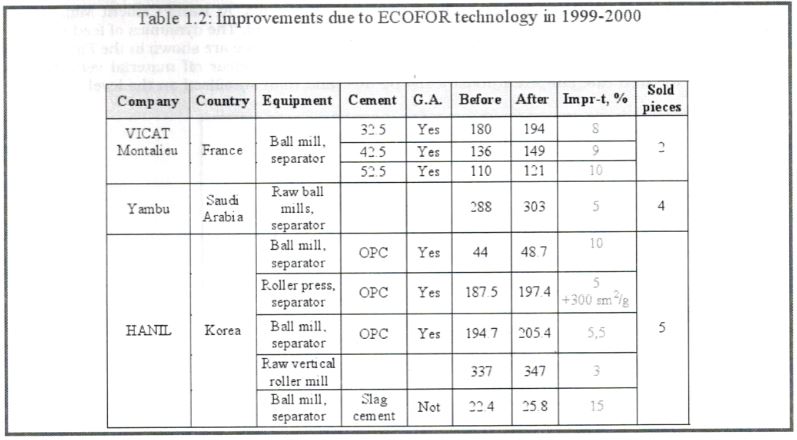 After turning on Ecofor devices, the Polycom pregrinding system became more ‘gluttonous.’ It was necessary to keep the amperage of the Polycom drivers at an optimal level by increasing the roller press’s feed. At the same time total feed had to be satisfactory for the final stage – a ball mill. The compromise was found by the adjustment of new set point for Sepol speed. As a result the total feed was increased by 8t/h but Blaine fineness was improved more significantly +by 432cm2/g at the same time.

We have the experience of using Ecofor device for vertical roller mills. At Hanil Cement Mfg. Co. we were able to improve the output of their 337t/h raw Fuller loesche mill. The dynamics of feed rate, differential pressure and amperage of mill driver after turning on our device are shown in the Fig. 3. 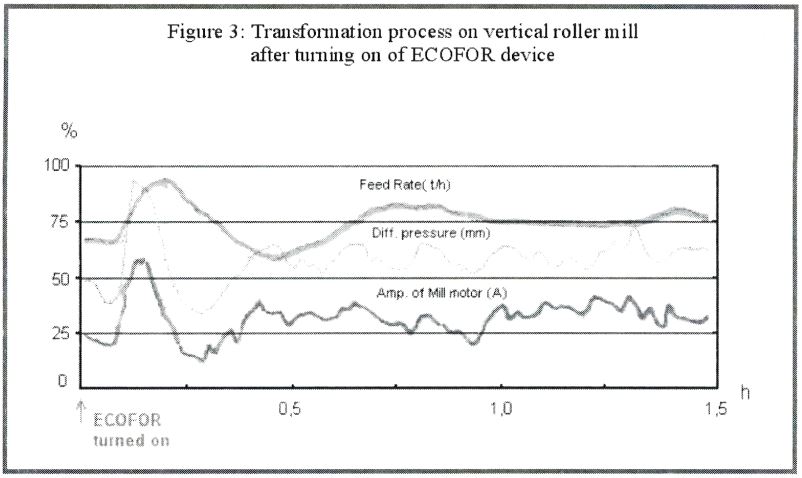 Eight minutes after turning on Ecofor device the grinding table began to clear off material very quickly. Consequently, the feed rate jumped automatically up 40% and than stabilised on the level +10t/h.

Sometimes we are questioned on the stability of Ecofor improvements. For illustration, you can see Table 3 with data of Vassiliko Cement Works, Cyprus that proves the stability of an average productivity rise of 9, 10 and 18% during two and half years. 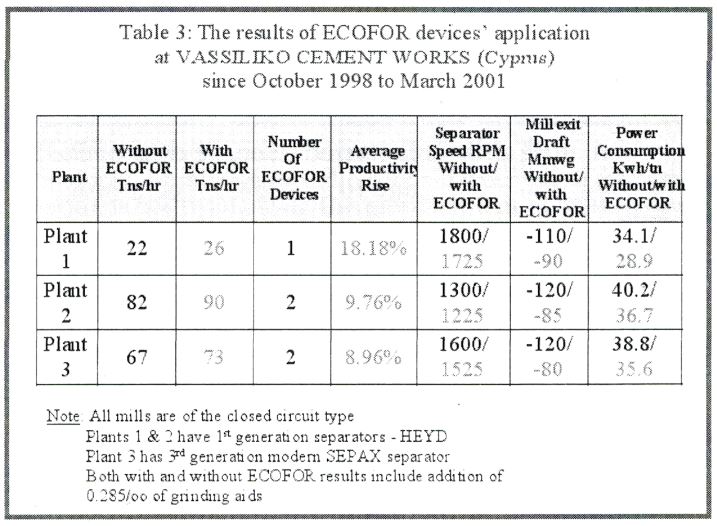 It is not so easy to promote any innovations and especially such a strange and an outwardly simple one. Despite successful introductions of our technology and devices we still have difficulties of a psychological character, not a technical one. Ecofor technology is not only the device itself but also ‘knowhow’ of application for different types of mills. If customers show a real positive attitude to our technology, we teach their staff our ‘know-how’ Ecofor technology cannot increase the mill’s output by itself. It only creates new perspective conditions for grinding. Operators have to use these new conditions skillfully and not traditionally. It is a pity that sometimes people do not want to and/or cannot understand us. Sometimes the carry-over effect of our device after its turning off brings misunderstanding. There is a false illusion that the Ecofor device doesn’t increase productivity since there is no immediate fall in output after it‘s turning off. Quite often we have to stand against the ambitions and interests of some specialists. Some of them like grinding aids so much that are jealous to our innovation without any grounds. All of the above disturbs us. but we continue to work for success.